Distributed databases have the following attributes:

This is the node that has the most recent copy of a record.

The big question is: How can you find this DMASTER? The answer is...

This node always knows which node is DMASTER.

The LMASTER for a record is calculated by hashing the record key and then doing a modulo of the number of active, LMASTER-capable nodes and then mapping this to a node number via the VNNMAP.

Let's say you have 3 nodes (A, B, C) and node A wants a particular record. Let's say that node B is the LMASTER for that record.

There are 3 cases, depending on which node is DMASTER:

smbd will find the record locally. No migration is necessary. The LMASTER is not consulted.

A will ask B for the record. B will notice that it is DMASTER and will forward the record to A. The record will be updated on both A and B because the change of DMASTER must be recorded.

A will ask B for the record. B will notice that it is not DMASTER and forward the request to C. C forwards the record to B, which forwards it to A. The record will be updated on A, B and C because the change of DMASTER must be recorded.

You can now add nodes D, E, F, ... and they will not affect migration of the record (if there is no contention for the record from those additional nodes).

Performance problems due to contention

If there is heavy contention for a record then (at least) 2 different performance issues can occur:

Before C gets the request from node B, C responds to a migration request from another node and is no longer DMASTER for the record. C must then forward the request back to the LMASTER. This can go on for a while. CTDB logs this sort of behaviour and keeps statistics.

Record migrated away before smbd gets it

to get an initial understand of what is logged and what the parameters are.  :-)

Read-only and sticky records are existing features that may help to counteract contention.

There are 4 packet types used as part of record migration

Here is a diagram showing the packet flow: 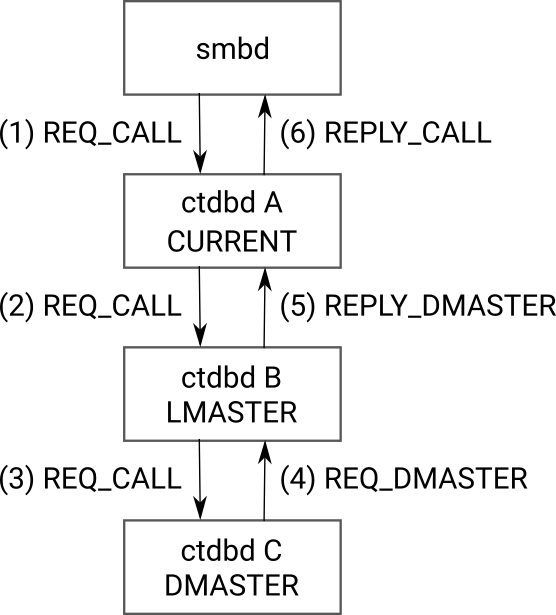 There are 2 simplification possible: